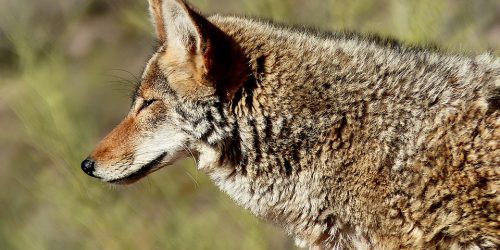 In order to keep coyotes wary and fearful of humans, is very important for residents to use a strategy as described below:

How to React to Coyote Interactions (“Hazing Strategy”):

Stand your ground and make yourself look bigger by raising your arms or waving a jacket above your head.  Do not turn and run as then you are acting like prey.  Use a noisemaker such as an air horn, a loud whistle, coins in a jar, or pots & pans.  If you do not have these items, yell something like “LEAVE ME ALONE” repeatedly (also alerts others) and if necessary, throw sticks or stones.  Pick up any small children or dogs.  After taking these actions, slowly retreat facing the coyote.  Never feed a coyote or leave food (garbage, pet food, etc.) out around your property as it may result in coyotes perceiving humans as non-threatening.  Always supervise small children and pets outside.

Natural Coyote Actions that Should Not be Reported:

Howling; seeing a non-aggressive coyote or coyote family out at any time of the day (they are not nocturnal); coyotes normally walking across streets, passing through properties, or in wooded areas.

IF ANY OF THE ABOVE WARNING BEHAVIORS ARE EXHIBITED, PLEASE SUBMIT THE COYOTE INCIDENT REPORT FORM HERE.

STAFF WILL THEN REVIEW THE INCIDENT AND CONSULT THE NYSDEC AND/OR USDA AS APPROPRIATE TO DETERMINE IF THERE IS A PUBLIC SAFETY THREAT.

Click here to watch the Coyote Information Exchange meeting held on Tuesday, March 9, 2021 at 6:30 via zoom with guest speaker Dana Goin from the Wolf Conservation Center.